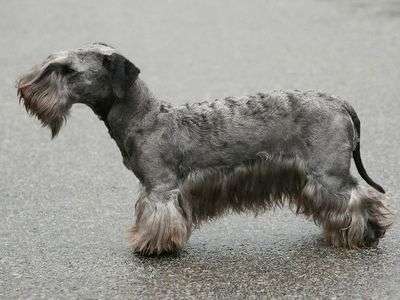 A Cesky Terrier can also be known as a Bohemian Terrier or a Czech Terrier; hence the "Cesky" derivative. It is of a diminutive size and like other breeds within the terrier family, this variety is feisty, loyal and quite intelligent. Originally bred for hunting, the Cesky Terrier is also suited for domestic environments although it will need plenty of exercise. Since 1963, this breed has been recognised in international competitions. What are some of the defining characteristics of this animal?

The roots of the Cesky Terrier can be traced as far back as 1948. A self-taught breeder by the name of František Horák crossed a Scottish Terrier and a Sealyham Terrier. He was attempting to develop a dog specifically designed for hunting game and waterfowl in the forests of Bohemia. It was not until fall of communism that the popularity of the Cesky Terrier took on a worldwide appeal. This terrier first entered competition within the United Kingdom in 1989. However, it is also worthwhile noting that this variety is known as one of the six rarest dog breeds in the world.

The Cesky Terrier is diminutive in size; males are typically no higher than 11.5 inches (290 millimeters) and their weight will range between 13 and 22 pounds (6 and 10 kilograms). It boasts the traditional terrier appearance defined by short, stout legs and a rather muscular appearance. Droopy ears and a thin tail also define this breed. It also displays a rich coat with colours varying from charcoal and grey to platinum. Brown is considered to be a rare shade and is not ideal for competition. One of the most prominent features of the Cesky (and indeed all terriers) is its straight muzzle that is punctuated by longer hair. When trimmed before a show, this hair provides the traditional "bearded" appearance that has come to define the breed. Eyes are generally coloured either tan or brown. Blue eyes are a disqualification. Well-sprung ribs and a cylindrical chest are also common features.

Cesky Terriers are quite loyal animals and develop loving relationships with their immediate families. Still, it should be noted that some personalities can display aggressive and protective behaviours. This is one of the reasons why some will debate as to whether or not the dog is suitable to be around young children. It is also observed that the Cesky Terrier is said to be less energetic than similar terrier breeds. Thus, it may be more adapted to live within a domestic environment.

The coat of this dog should not be "stripped" (the act of pulling out dead hairs) but clippers are recommended. Hair on top of the body and over the tail should be cut. Hair on the chest, legs and face should remain long. To avoid tangles and the presence of insects such as ticks, this longer hair needs to be brushed on a daily basis.
This is a relatively healthy dog and a life expectancy of more than ten years is not uncommon. However, there are a few conditions which can occur over time. One is known as "Scotty Cramp". This may slightly hinder mobility but it is not painful or serious. Other issues that should be determined are eye disorders, cardiac issues and (commonly) hip dysplasia. So, it is important to check the breeding stock before choosing to purchase one.
The Cesky Terrier is indeed a striking breed and while quite rare, it nonetheless enjoys a great deal of popularity during international competitions.