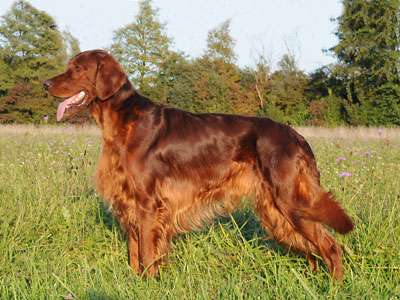 Lively and affectionate, the Irish Red Setter was originally bred as a gundog, and the breed is now a very popular choice as a family dog. They do very well in training, but you'll need lots of patience and persistence in the early stages.

Irish Red Setters are demonstrative, sociable and willing to please. They do go through a rather clumsy and inappropriately exuberant adolescent stage and can be easily distracted – they're hunting dogs, after all – but with the right training and plenty of exercise they'll grow up into good-natured and loving dogs that get along well with everyone, including your other pets.

The Irish Red Setter is often called either the Irish Setter or the Red Setter, and is primarily differentiated from the other Setters by having a uniformly auburn coat. Historical references to Setters, as hunting dogs, can be found in sixteenth century documents, so these playful and charming dogs go back a very long way. The Irish Setter originally had a red and white coat and shorter legs, but during the nineteenth century the white was bred out of the coat. The breed standard for the modern Irish Red Setter was drawn up 1886 and has remained largely unchanged ever since.

The Red Setter is an all-purpose hunting dog – it has an excellent nose and is very fast, can perform both pointing and retrieving duties, is comfortable on all sorts of terrain, communicates well with the hunter and is particularly good with birds. Many modern breeders, however, have tended to breed more for looks than hunting ability.

The Irish Red Setter is a medium to large dog, sporting a beautiful long-haired coat in reddish colours ranging from a chestnut red to a deep mahogany, is long-tailed, drop-eared, and has a graceful and elegant look. The nose is black or brown, and the almond-shaped eyes are medium to dark brown in colour. The body is a little longer than the tail, which is feathered, and there is also feathering on the ears, belly and legs.

Red Setters are generally healthy dogs, although they do have a tendency to bloat so you may need to consider two or three smaller meals per day instead of one large one. They're highly sociable and require lots of companionship to thrive, and can be prone to separation anxiety if this is not forthcoming. They are very trainable, but can be a little wilful, so training should start young and be firm and persistent. These dogs are sensitive and will not respond well to harsh commands or handling – you'll need patience, and lots of it, but the loyalty of your well trained Irish Red Setter will be worth every minute.

Those lovely long red coats require regular grooming with comb and bristle brush, and it'll be necessary to trim the feathered areas around the ears, legs and neck periodically to keep them looking good. And last but not least, your Setter really does need a good deal of daily exercise and plenty of room to run, in all weather conditions.