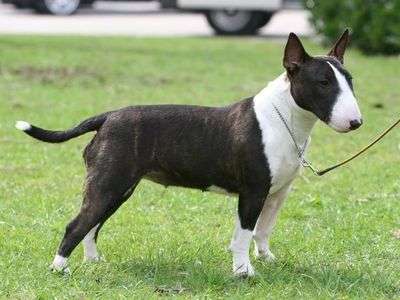 One of the defining characteristics of the miniature Bull Terrier is its distinctive long face, large snout and stocky body. Interestingly enough, the term "miniature" no longer applies to this breed. These terriers were first considered "miniature" based upon their weight. This led them to be slightly confused with other breeds such as the chihuahua. During the 1970s, the criteria changed and became based upon the weight of the animal. In modern times, the weight of a miniature Bull Terrier can vary between nine and sixteen kilogrammes.

A Combination of Affection and Stubbornness

This animal shares the same intelligent characteristics which define all terriers. One of the notable aspects of this miniature breed (and likely due to their relation to a full-sized terrier) is that they can exhibit courage even when confronted with a dog of a much larger size. For this reason, they are excellent pets for those who enjoy both company and protection. However, the Bull Terrier can be quite willful and some can require a great deal of training.

On the other hand, these animals are extremely affectionate towards people and are very loyal to their masters. They are also known to be quite good around children. Still, their protective nature may place other animals at risk; particularly if they are in close proximity to the child in question. Miniature Bull Terriers can be questionable around other dogs so mch care be taken when in public spaces. It is best to leash the terrier unless it is extremely obedient.

The history of this animal can be traced back to 1872 when it was mentioned in a piece of literature entitled The Dogs of British Island. Due to its extreme intelligence, the Miniature Bull Terrier was used both as a companion as well as a hunting dog; small game were its typical quarry. These animals were particularly popular for those who had a limited amount of space but still wished to possess a loving dog.

Due to a rather single-minded nature, it is important to begin training this animal at a very early age. While basic commands are naturally essential, the dog should also be taught to socialise with other animals. If this is not done, the owner will run the rusk of the terrier becoming averse to other breeds (and even other Bull Terriers) when it reaches adulthood. As the terrier has a great deal of energy, all training must take this into account.

As the coat is quite short, only a quick weekly brushing is normally required. Since their coat tends to be thin, terriers with white patches (which is very common) need to be protected from the sun. It is not uncommon for an owner to apply sunscreen to these areas. This can help prevent sunburn and even some types of cancer.

Although the entire terrier breed is considerably healthy, it is not uncommon for a dog to be born deaf in one or both years. As this condition is hereditary, no further breeding with the animal should take place. Miniature Bull Terriers can also be susceptible to knee problems later in their lives. While they are very energetic at an early age, this energy will tend to ebb as they reach maturity. Older animals should be exercised regularly, as the risk of obesity can quickly become a reality.

These are some of the most unique traits of such interesting animals. Offering love, loyalty and a unique stubbornness, the Miniature Bull Terrier is indeed a one-of-a-kind dog.