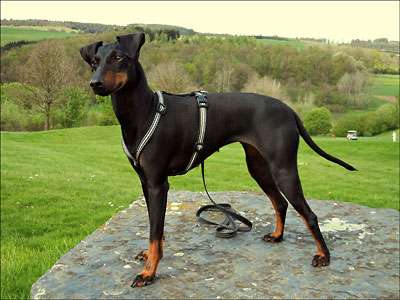 The Manchester Terrier is classed as the oldest terrier breed to be identified in history. The breed, as it is recognised today, gained popularity in early 1800s England, when rat killing became a sport in the face of poor sanitary conditions. A whippet was cross-bred with a terrier, producing the breed that we know today.

The "Manchester" part of the breed's name originates from the fact that the city of Manchester was the breeding centre for these dogs, from around the middle of the 1800s onwards.

The Manchester Terrier comes under two distinct varieties, the Standard and the Toy. The breed has a muscular stature and a very smooth-skinned body. The skull is narrow, with a pointed muzzle and a dip in the forehead. Naturally, the dog's ears point upwardly, the tips dropping over into a V shape, and their eyes a very intense brown, verging on black.

The Manchester Terrier sports a black and tan coat, with the tan markings typically appearing very similarly from one dog to another. Generally, the underbelly and chest, the inside of the ears, and around the mouth are all seen as tan in colour, as well as the lower legs and paws. The rest of the body is usually completely black.

The breed's short coat means that they shouldn't be left alone outside for a long duration. As their coats are predominantly black, they absorb heat easily and can thus overheat very quickly. Similarly, the lack of any long fur on the body means that when it is cold outdoors, they can easily suffer a rapid drop in body temperature.

The breed shows a high level of devotion towards its master and likes to impress; as such, they require a high level of attention. If they do not receive sufficient interaction from humans, then they can suffer from separation anxiety and be likely to become destructive or loud. A general lack of leadership from the master or family unit when the dog is at a young age can lead to the development of negative personality traits in later life.

When considering buying a puppy from a breeder, it's important to first see health clearance for specific conditions, as some blood lines can be more prone to certain conditions than other lines. In particular, the puppy should have clearance for hip dysplasia, a condition that is most commonly seen in dogs that are known for their high energy levels and agility, particularly hunting or sport dogs.

This breed can also be susceptible to glaucoma, as well as Von Willebrand's Disease, an ailment that affects the clotting ability in the blood. This can lead to conditions such as nosebleeds, or cuts that take longer than normal to stop bleeding.

This breed requires daily exercise and interaction for a bare minimum of 30 minutes per day. This should be meaningful, exhausting exercise, or training-based tasks, to prevent the dog becoming bored or encouraging any negative behaviour.