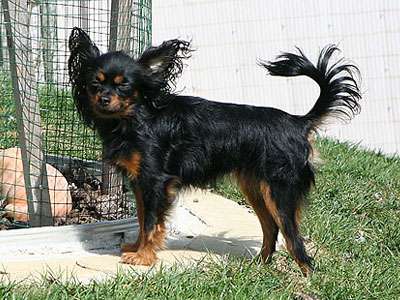 The Russkiy Toy, also known as the Russian Toy, is a small, toy-sized dog from Russia. Regarded as one of the smallest dog breeds in the world, it weighs about four to six pounds and stands at a height of about eight to nine inches. It is available in two types: smooth-haired and long-haired. With its long legs, long neck, strong body, large stand-up triangular ears, big eyes, and small head with a little muzzle, the smooth-haired Russkiy Toy resembles a little deer.

The long-haired Russkiy Toy is a copy of the smooth-haired Russkiy Toy only that it has a short coat all over the body and long beautiful fur on its ears. Coat colours include solid black, black and tan, brown with white spots, and solid brown.

The English Toy Terrier was one of the most popular decorative dogs in Russia at the beginning of the 20th century. However, when the shipping of toy terriers was stopped between 1920 and 1950, the population of these dogs began to decline dramatically. This prompted Russian dog breeders to start an inbreeding programme to save the breed, which led to the creation of the Russkiy Toy. This breed was officially recognised by the American Kennel Club (AKC) in the year 2008.

Apart from being intelligent, the Russkiy Toy is also strong, agile, alert, and full of life. This tiny dog is also devoted to its owner and is affectionate with the family. However, it is reserved with strangers and will bark excessively to draw your attention to anything that doesn't seem quite right.

The Ruskiy Toy is a relatively healthy dog and can live up to about 10 to 15 years without having any serious complications. However, it can still suffer from patellar luxation, bone fractures, gum disease, and severe allergic reactions to certain flea medications. To protect this dog's health in the best way possible, it is important to visit your veterinarian regularly for check-ups and relevant imunisations.

Due to its lively and obedient nature, the Russkiy Toy is easy to train and socialise. As compared to many other types of dogs, it picks up basic training quickly and has a natural desire to please its master. Since this little dog is sensitive to criticism, it is advisable to use positive training methods. To get more tips on how to train this dog effectively, you can ask for assistance from your local dog trainer.

When it comes to exercise, the Russkiy Toy needs daily walks and regular play sessions to help it stay fit and be more productive. Interactive games such as Frisbee, football and tennis all play a major role in keeping the dog occupied and healthy.

The Russkkiy Toy requires a free open space where it can roam around freely from time to time, meaning that it should not be confined to little areas. Although it is a friendly dog, it should not be teased or harassed by anyone because this may force it to defend itself by attacking.

Because of its high energy levels, it requires plenty of water and a good supply of food. Be sure to give it a balanced diet of healthy foods to prevent overeating and obesity.