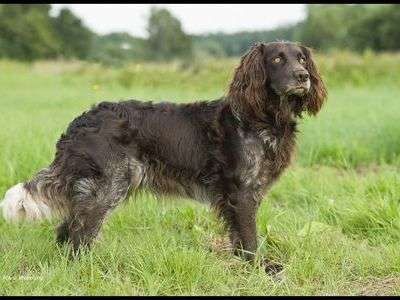 The German Spaniel was first bred in Germany at the end of the 1800s, in order to be used for hunting purposes; therefore, in terms of grouping, the breed is usually referred to as a "gundog". Though it is less commonly seen outside of Germany, in 1996, the German Spaniel was recognised officially by the United Kennel Club. The breed is a descendant of an older German type of dog, a Stoeberer, and its German name is Deutscher Wachtelhund.

The German Spaniel is classed as a medium sized dog breed, with a strong, muscular body type. This makes the dog ideal for fetching game, including foxes or hares, which have been shot by the handler or hunter. The dog's body is coated in long and thick hair, with ears typically reaching a length equal to the level of the dog's nose. Their coat is either brown or brown road; the former may have white patching on the chest, while the latter can sport red or brown markings anywhere on the body.

The dog's head is in-proportion to its body, with medium, oval-shaped eyes that are either hazel or brown in colour. The teeth meet in a strong scissor-bite.

The German Spaniel is very adept at its job and extremely versatile. Most handlers involved in hunting will use the dog to hunt upland game (non-water fowl game birds), though the breed is also exceptional at blood tracking larger game, too. These dogs will follow a scent persistently when tracking game; however, recall is still possible, unlike with hounds.

The breed is easily trained, particularly in hunting activities as mentioned above. However, their strong instinct to hunt means that they are not often the first choice for those families simply looking for a household pet. However, that is not to say that the dog is not an appropriate choice for a family atmosphere. The breed is an affectionate and loving one, which would relish a family environment, providing there is much attention given from the family.

As would be expected, the breed requires a great deal of room to exercise and explore their environment, so it's important to take this space requirement into account if choosing to home a German Spaniel. These dogs also love the water.

A common ailment with hunting dogs can be hip dysplasia, due to the high level of physical exertion on the dog's body. Some dogs within the breed are more genetically predisposed to this condition.

The breeding requirements for this type of dog are reasonably strict within Germany, which has helped to limit the number of German Spaniels with this genetic health condition. Breeders are first required to obtain permission from the "German Wachtelhund Club", before they may breed their German Spaniels. The dog in question must also have passed a number of measurement tests, including having X-rays taken, to rule out any hip dysplasia.

Due to their long hair, these dogs need to be brushed once per day, particularly in the areas where the hair grows its longest. This aids in the prevention of tangling and knotting. The breed can be quite prone to ear infection, due to the occlusion of any ventilation caused by their hair, so the ears need to be checked regularly.